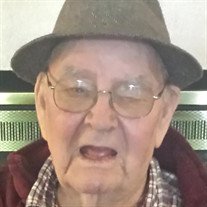 He was also preceded in death by three sisters, two brothers (one twin), and his son Donald Peters, Jr.

Don was a U.S. Army veteran who was stationed in Germany. He also played trombone in the military band. He was a former member of the Minonk American Legion Post #142.

Don worked as a farmer for most of his life. In his younger years he worked for Toluca garment factory. After retiring from the farm he worked at the Minonk Casey's for more than 10 years. He was a member and Elder of First Presbyterian Church in Minonk where he also served on the committee on ministry. He also taught adult Sunday school and was in the choir. He was a school board member of MDR for 21 years and served as president for 17 of those years. He also formerly attended First Baptist Church in Minonk.

A funeral service will be held at 11 a.m., Saturday, September 15, 2018 at Ruestman-Harris-Funeral Home in Minonk. Pastor Eric Holtrop will officiate. Visitation will be from 4 to 7 p.m., Friday at the funeral home and one hour prior to services on Saturday. Burial will be in Minonk Township Cemetery.

Memorials may be made to the family.


To send flowers to the family or plant a tree in memory of Donald D. Peters, please visit our floral store.

To send flowers to the family in memory of Donald Peters, please visit our flower store.