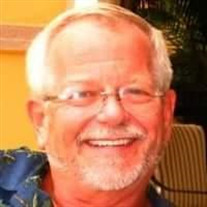 Kappa-Donald Leslie Miller, 63, of Boynton Beach, FL and formerly of Bloomington, IL passed away unexpectedly at 6:39 pm on Sunday, August 28, 2016 at his home in Kappa, IL.

He was born in Normal on January 14, 1953 the son of Donald Wilbur and Margaret Joan Brown Miller. He married Siobhan Cummins in December 2011 in Livingston County. She survives.

He graduated from El Paso High School in 1972 and joined the Air Force. He was an honorary member of the VFW. He completed a plumbing apprenticeship in 1981 through Plumbers and Pipefitters Local 99 in Bloomington and worked as a plumber/pipefitter for most of his life. In his retirement years he learned massage therapy and worked as a therapist in South Florida. He also enjoyed golfing in Florida and Illinois.

He is survived by his two sons, Chad Miller of Bloomington, IL; Jeremy (Leia) Miller of Dallas, TX; two grandchildren, Mason Gangarossa and Savannah Miller; three brothers, Dan Rutledge of Secor; Dennis Rutledge of Kappa; David Rutledge of TX; one step-son William Rothang of Boynton Beach, FL; and several nieces and nephews. He also leaves behind a large circle of friends in his Florida community.

He was preceded in death by his parents and one brother, Douglas Rutledge.

A memorial service will be held on Tuesday, September 6, 2016 at 11:00 at the Ruestman-Harris Funeral Home in El Paso. Fr. Carl LoPresti will officiate. Visitation will be one hour prior to the service. Cremation rites have been accorded. A celebration of Donny's life will be held at 1:00 pm at The Sit -N-Bull in Hudson, IL.

Memorials may be given to a charity of the donor's choice. Online condolences may be sent to www.ruestmanharrisfuneralhome.com.


To send flowers to the family or plant a tree in memory of Donald Miller, please visit our floral store.

To send flowers to the family in memory of Donald Miller, please visit our flower store.