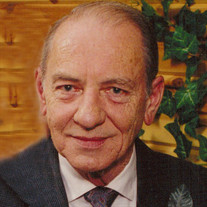 He was born on November 28, 1937 in Ottawa, IL a son of Donald and Mary Macella Irion Blue. He married Patricia Greene on May 7, 1998 in Tennessee. She survives in El Paso.

He was preceded in death by his parents and one sister, Karen.

Dale was a veteran who served his country with the United States Marine Corps. He had worked for IBM for 20 years until his retirement. He was the owner/operator of the El Paso Antique Mall.

A Memorial Service with full military honors will be held at 11:00 am on Friday, December 9, 2016 at Ruestman-Harris Funeral Home in El Paso. Visitation will be held one hour prior to the service at the funeral home. Private family inurnment will be in Hinthorn Cemetery at a later date.

Memorials may be given to a charity of the donor's choice. Online condolences may be sent to the family at www.ruestmanharrisfuneralhome.com.


To send flowers to the family or plant a tree in memory of Dale D. Blue, please visit our floral store.

Please click here to view the video tribute
To send flowers to the family in memory of Dale Blue, please visit our flower store.