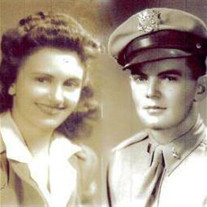 Colonel Warren J. "Bud " Meyer, 94, of Satellite Beach, Florida, formerly of Carlock, passed away on August 21, 2018 at his residence.
A memorial service will be held at 10:00 a.m. on Tuesday, September 11, 2018 at Patrick Air Force Base Chapel II, 84 Harrier Avenue, Satellite Beach, Fl. 32937. A committal service with full military honors will be held at 2:00 p.m. on Saturday, September 22, 2018 at Troyer Cemetery, County Rd 1000 East and 2100 North Rd, Rural Carlock.
In lieu of flowers, the family of Bud Meyer requests donations be made to Cancer Care Center of Brevard, 1430 S Pine Street, Melbourne, Fl. 32901. Ruestman-Harris Funeral Home in Minonk is assisting the family with arrangements.
Bud was born on November 1, 1923, in Normal, Illinois, the first son of Arthur L. & Mae (Reeves) Meyer. He married his wife of 72 years, Marie J. ‘Billie' Koltka on July 5, 1945. She preceded him in death on October 21, 2017.
Surviving is his son, John R. Wendy Gelart) of Bellevue, WA; brother, James E. (Beverly) Meyer of Minonk, IL and many nieces and nephews in both the USA and Australia. For over 30 years, he had a close and loving relationship with Rowland and Selvi Thaver, He considered Rowland and Selvi, as his ‘adopted son and daughter' and their son, Dr. Christopher Thaver, as his ‘adopted grandson'.
He was preceded in death by his parents.
Bud enlisted in the United States Army in 1943 at Camp Dodge, Iowa. A 30 year veteran, he went up through the ranks from Private to Colonel. During World War II, served in New Guinea and the Philippine Islands, South West Pacific Theater. Bud met his wife, Marie J. "Billie", while attending an officer candidate school, in Brisbane, Australia. When the war ended, he was part of the Army of occupation of Japan, stationed in Nagoya & Yokohama. Bud was a veteran of the Korean War. Other assignments included, Hqs, U.S. Army Europe, Heidelberg, Germany, Office of the Dept of Army Inspector General, Washington, DC , CO, 13th S&S Bn, Uijongbu, Korea and served on the Army General Staff (Logistics), the Pentagon. He graduated from the U.S. Army Command & General Staff College, Ft Leavenworth, KS. His decorations and service medals included the Legion of Merit with one Oak Leaf Cluster, the Asiatic-Pacific Campaign Medal with 2 bronze stars, Philippine Liberation Medal, Army of Occupation Medal & the Korean Service Medal. He retired in 1973 with just over 30 years active duty.
In 1974, he came to Brevard County, settling in Satellite Beach. He was active in community affairs, serving on city and county boards and committees. Bud was a volunteer counselor at the Retiree Activities Office, PAFB, FL. and a volunteer at Holmes Regional Hospice.
Bud enjoyed music and sang with the PAFB Protestant Choir for many years. He liked working on beautification projects (planting and caring for trees and shrubs), in the 400 block of Jamaica Blvd. He was a life member of both the national and local chapter of the Military Officers Association of America. Also, a member and volunteer at Our Club Health and Fitness Center, Indian Harbour Beach, FL.
The family would like to thank nurse Lenora Edwards, Health First Private Duty, for her loving care" over many months; he considered her like his" adopted daughter". would also like to thank all of his doctors; special thanks to Doctors Shankar and Badolatol nurses; aides; and radiation team members in the Cancer Care Center of Brevard. May God richly bless each of you.
Online condolences and memories of Bud may be shared with the family at ruestmanharrisfuneralhome.com.


To send flowers to the family or plant a tree in memory of Colonel Warren 'Bud' J. Meyer, please visit our floral store.

To send flowers to the family in memory of Colonel Meyer, please visit our flower store.