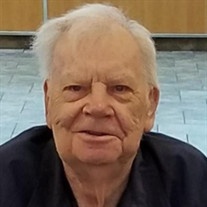 Clifford K. Seggerman, 90, of Secor, IL passed away at 11:40 a.m. on Thursday, October 15, 2020 at Heritage Health Nursing Home in El Paso.
He was born on July 16, 1930 in Secor, IL a son of Henry and Etta Dirks Seggerman. He married Janet Lowder, the love of his life for over 64 years, on January 18, 1958 in Secor, IL. She survives.
Survivors also include two daughters, Teresa (Robert) Meginnes of Secor; Lori Ballard of Bloomington; five grandchildren, Quinn (Patrick) Mullin; Nathan (Amanda Paul) Meginnes; Emily (Craig) Griswold; Nicholas Ballard; Dacia Melton; six great grandchildren, Avery Mullin; Penelope Mullin; Lincoln Griswold; Sierra Ballard; Marti Ballard; Rian Patton, who knew him as their beloved "Poppy".
He was preceded in death by his parents, one son, Ronald Seggerman; two brothers and three sisters.
Clifford served in the U.S. Army during the Korean War.
He worked at Caterpillar as a machinist. He also was a rural mail carrier in Secor and Roanoke.
He was a member of St. John's Lutheran Church in Secor and held many titles at church. He also served as a volunteer fireman in Secor for many years and was a member of the Secor Sportsman's Club.
Clifford was an avid Chicago Cubs fan and enjoyed doing woodworking in his spare time.
A private graveside service will be held at Secor Cemetery in Secor where military rites will be accorded at the grave. Rev. Michael Peters will officiate. Ruestman-Harris Funeral Home in El Paso is handling arrangements for the family.
Memorial contributions may be made to St. John's Lutheran Church in Secor or St. Jude Children's Hospital. Online condolences may be sent to the family at www.ruestmanharrisfuneralhome.com.

To send flowers to the family or plant a tree in memory of Clifford K. Seggerman, please visit our floral store.

To send flowers to the family in memory of Clifford Seggerman, please visit our flower store.