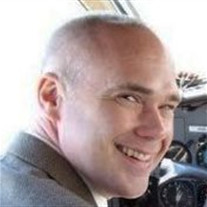 GRAY, Maine - Clarke W. Tate, 52, of Gray, Maine, passed away at 4:45 p.m. July 12, 2014. His restored 1942 Culver Cadet airplane went down in the woods moments after takeoff from the Limington-Harmon Airport, York County, Maine.
He graduated in 1980 from Glenbard West High School in Glen Ellyn. He also attended Los Angeles Art Center, a graduate-level school, where he served as student mentor.
He shared a Chicago art studio with his father. He moved to Gridley, married on Aug. 16, 1991, and continued his art business. He moved to Poland and continued his U.S. art work by computer.
He attended flight school in Florida. He then started his flying career in Michigan, and later flew in Savannah, Ga., and Maine. He recently took training to qualify for national and international chartered private jet flights. He was a member of the Experimental Aircraft Association and Aircraft Owners and Pilots Association.
He is survived by his wife, Lucyna; his parents, Don and Marilyn Tate, Gridley; his brother, James Tate, El Paso, and his wife, Carrie, and their children, Jonathan, David, Catherine and Mary.
His wife will move to their home in Poland. He will be buried in Poland.
Visitation will be from 4 to 6 p.m. Saturday at Ruestman-Harris Funeral Home, El Paso, with a brief service following.


To send flowers to the family or plant a tree in memory of Clarke W. Tate, please visit our floral store.

Please click here to view the video tribute
To send flowers to the family in memory of Clarke Tate, please visit our flower store.