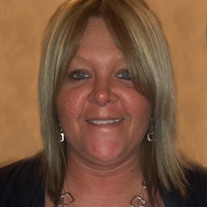 Christina "Christy" Beyer Cooper,
41, of Bloomington passed away at her residence on Monday (July 15,
2013) at 6:40 p.m. Her funeral will be at 10:00 a.m. on Saturday
(July 20, 2013) at Kibler-Brady-Ruestman Memorial Home and her Mass
of Christian Burial will be at 10:30 at Holy Trinity Catholic
Church with Reverend R. Anthony Lee and Reverend Jeffrey Windy
officiating. Prayer service will be at 3:30 p.m. with visitation
from 4-7 p.m. on Friday (July 19, 2013) at Kibler-Brady-Ruestman
Memorial Home in Bloomington. Burial will be in St. Joseph Cemetery
in Bloomington. Memorials may be made to her four children in care
of Heartland Bank, 725 Fort Jesse Rd, Normal, IL 61761.

Christy was employed at Mclean
County Unit #5 at First Student and enjoyed playing online video
games and cards, poker was her favorite game. She was a great cook
and she never left on a trip from home without her "smelly pillow."
Christy will be sorely missed by her friends and family.

Online Condolences may be made to
the family at kiblerbradyruestman.com.

To send flowers to the family or plant a tree in memory of Christina "Christy" Beyer Cooper, please visit our floral store.

To send flowers to the family in memory of Christina Cooper, please visit our flower store.