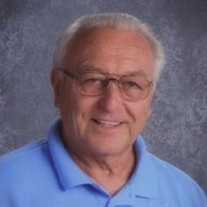 Mr. Spires was a veteran of The United States Army National Guard where he received the Outstanding Achievement Award from the Chicago Tribune in 1961.

Charles was a member of the St. Paul's United Church of Christ in Minonk, Illinois. He was a farmer all of his life and belonged to the National Farmer's Organization for 56 years, and was the Woodford County President for several years. He also worked for SMF in Minonk, Illinois; McEachern United Methodist Church in Powder Springs, and the Paulding County School System in Dallas, Georgia.

Charles was an avid volleyball player and enjoyed many years of playing and sponsoring a team in addition to being a master gardener. He also enjoyed hunting and fishing.

His visitation will be held at Ruestman Harris Funeral Home, 775 N. Chestnut Street, Minonk, Illinois 61760 on Friday, August 5, 2016 from 5 pm until 8 pm. The funeral services will be held on Saturday, August 6, 2016 at 10 am at St. Paul's United Church of Christ, 236 W. Fifth Street, Minonk, Illinois with Rev. Ed Sinclair officiating. Interment will follow at Minonk Township Cemetery. A visitation will be on August 3, 2016 at Clark Funeral Home, 4373 Atlanta Highway, Hiram, Georgia from 6pm until 8pm.

Online condolences may be sent to the family at www.ruestmanharrisfuneralhome.com.

To send flowers to the family or plant a tree in memory of Charles W. Spires, please visit our floral store.

To send flowers to the family in memory of Charles Spires, please visit our flower store.