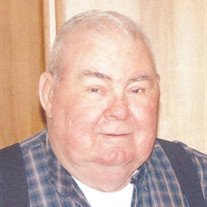 Roanoke - Charles E. Schlossler, 79, of Roanoke, passed away at
8:55 pm on Thursday December 12, 2013 at the Apostolic Christian
Home of Roanoke.

He was preceded in death by his parents and one sister, Isabelle
Sapp.

Charlie proudly served his country in the Air Guard and was an
Army veteran.

Charlie was an iron worker working at Hagerty Steel and was a
member of the Teamsters Union local #627 in Peoria.  He also
had worked as a truck driver and loved working outside for FS and
several local farmers during harvest time.

Charlie loved the outdoors, he loved to travel and camp with
family and friends.   He was a member of the Izaak Walton
League of America where he had served as past president and on
their board of directors.  He was a past member of the
Mackinaw Canoe Club.

Charlie was also known as a "Jack of all trades" and was a
skilled handyman and enjoyed building and tinkering, especially on
his antique garden tractors.

A celebration of life will be held for Charlie at 7:00 pm on
Monday December 16 at Knapp-Johnson-Harris Funeral Home in
Roanoke.  Pastor Charlie Graul will officiate.
Visitation will be held from 4-7 pm at the funeral home prior to
the service.  Per Charlie's wishes cremation rites will be
accorded and burial of ashes will be at a later date.

The family would like to thank the staff at the Roanoke
Apostolic Christian Nursing Home for the kind and compassionate
care that Charlie received there and have requested the memorial
contributions be given to the nursing home.  Online
condolences may be sent to the family at
www.knappjohnsonharris.com.

To send flowers to the family or plant a tree in memory of Charles Schlossler, please visit our floral store.

To send flowers to the family in memory of Charles Schlossler, please visit our flower store.