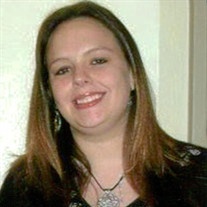 She was born on December 3, 1982 in Fort Collins, CO a daughter of Gary and Pam Stansfield Jolly.

Survivors include her mother, Pam of Minonk; one brother, Dustin (Ashley) Jolly of Minonk; boyfriend, Scott Sharp of Minonk; two nieces, Alanna and Rylee; and numerous aunts and uncles.

Cassie graduated from Fieldcrest High School in 2000 where she was active in the Art Guild. She received her Associates Degree from Heartland College. She was a member of the First Baptist Church in Minonk where she accepted Christ on January 31, 1993.

Cassie worked as a waitress at various restaurants. She was previously employed by AFNI and was a Lia Sophia and Norwex consultant. She was a loving daughter, sister, and girlfriend. Cassie had a good kind heart and a loving smile. She was an organ donor and participated in many Red Cross blood drives.

Funeral services will be held at 11:00 am on Tuesday, January 5, 2016 at the First Baptist Church in Minonk. Rev. Eric Holtrop will officiate. Visitation will be held on Monday, January 4, 2016 from 4-7 pm at Ruestman-Harris Funeral Home in Minonk. Burial will be in Hillcrest Cemetery in Streator, IL.

Memorials may be given to the Polycystic Kidney Disease Association or a charity of the donor's choice. Online tributes and condolences may be directed to www.ruestmanharrisfuneralhome.com.

To send flowers to the family or plant a tree in memory of Cassandra "Cassie" Jolly, please visit our floral store.

Please click here to view the video tribute
To send flowers to the family in memory of Cassandra Jolly, please visit our flower store.