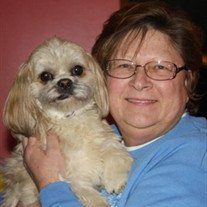 Visitation will be from 9-11:00
a.m. prior to the service at the church. Funeral services will be
held at 11:00 a.m. on Monday, November 18, 2013 at Trinity Lutheran
Church in Bloomington with Pastor Thomas Wirsing officiating.

Interment will be at Park Hill
Cemetery in Bloomington. Memorials may be made to the American
Cancer Society or to the Humane Society of Central Illinois in
Candy's memory. Kibler-Brady-Ruestman Memorial Home in Bloomington
is assisting the family with arrangements.

Candy was born on June 1, 1959 in
Bloomington, a daughter to Virgil and Betty Wellenreiter
Malinowski. She married Albert "Al" Emery on June 8, 1985 in
Bloomington. He survives.

Candy was a member of Trinity
Lutheran Church in Bloomington. She enjoyed spending time with her
daughter, knitting and always made pies for family gatherings. She
was a very loving, selfless person who will be dearly missed.

To send flowers to the family or plant a tree in memory of Candy M. Emery, please visit our floral store.

To send flowers to the family in memory of Candy Emery, please visit our flower store.