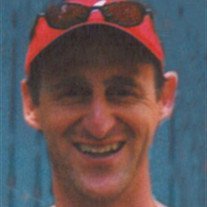 A Celebration of Life service will
be at 11:00 a.m. on Saturday, May 24, 2014 at Kibler-Brady-Ruestman
Memorial Home in Bloomington.  Visitation will be one hour
prior to the service on Saturday at the memorial home.
Cremation rites have been accorded.

Memorials may be made to the Lucas
Chamberlain Education Fund at Commerce Bank in Normal.

Bruce was born on April 11, 1962 in
Kewanee, a son to Larry E. And Sharon R. Brignadello
Chamberlain.  He married Jane E. Anderson on June 1, 1991 in
Bloomington.  She survives.

He was preceded in death by his
parents, and a brother in-law, Pete Theobald.

After his college years, he worked
at Illinois Wesleyan University Library and the Bloomington Public
Library.  Later,  he worked as a welder for Hundman
Lumber Mart in Bloomington.

Bruce Enjoyed music and listening
to the "Who", "Elton John" and "John Prine".  He loved drawing
and reading.

He was an avid St. Louis Cardinals
and Chicago Bears fan.   He loved the good times with
friends and family and cherished all his family. He was a caring
and loving father, uncle and brother.

To send flowers to the family or plant a tree in memory of Bruce A. Chamberlain, please visit our floral store.

To send flowers to the family in memory of Bruce Chamberlain, please visit our flower store.