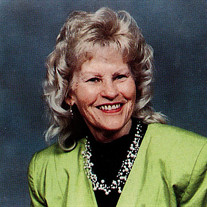 Beverly "Bev" J. Fauth 90, of El Paso, passed away on February 6, 2019, at her home. She was born on February 8, 1928, in Bloomington, IL to the late Elzie and Gladys (Burger) Russell. She married Howard Kraft on Oct. 14, 1945. She later married Clyde L. Tegard on December 28, 1966, in Clovis, NM. He preceded her in death on March 10, 1973. Bev married Dave Calhoon on May 28, 1976, in El Paso. She later married Curt Fauth, on December 14, 1997, in an airplane over Lake Bloomington.
She is survived by one daughter; Debbie (Huey) Tegard-Harroun, of Holly, Michigan, one step-daughter; Tobein Tegard, of Gridley, two daughters-in-law; Billie Kraft of Secor, and Bev Kraft of Heyworth, ten grandchildren, sixteen great-grandchildren, and three great-great-grandchildren.
She was preceded in death by her three sons; Larry Kraft, Gary Kraft, and Richard Kraft, and one daughter; Pam Kraft.
Bev maintained the same residence, for the last 56 years. She created a beautiful and comfortable home, for her family's enjoyment. Holidays and special events were celebrated, with love. Home cooked meals were her specialty. She excelled in gardening; creating a "garden of paradise", within her own backyard. Being an avid animal lover, she shared her love with many dogs over her lifetime, but none were so special, as her late beloved Polar Bear.
She waitressed at several resturants in Bloomington, including the Sinorak for 13 years, the Illinois House, the Hy-De-Ho, the Grand Hotel, The Elms in El Paso, and La Petite Maison in Roanoke. She also had been employed at Sear's Eastland Mall, as a waitress upon opening in the 1960's and later in the women's department, in the late 1980's. In addition, Bev was known for raising German Shephards in the 1960's and 1970's.
Visitation is scheduled at 10:30am to 12:00 pm on Tuesday, February 12, 2019 at Ruestman-Harris Funeral Home, in El Paso. Funeral services will be held at 12:00pm. Pastor Joyce Rinkenberger will officiate.
Memorial contributions may be placed in Bev's honor to the Christian Appalachian Project, Wedrose Acres Animal Sanctuary, or the Melvin Weinstein Parkinson's Foundation. Online tributes and condolences may be made at ruestmanharris.com.


To send flowers to the family or plant a tree in memory of Beverly "Bev" Fauth, please visit our floral store.

Please click here to view the video tribute
To send flowers to the family in memory of Beverly Fauth, please visit our flower store.