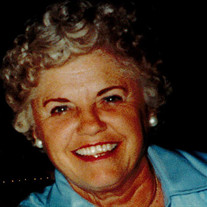 Her funeral mass will be at St. Patrick's Catholic Church in Minonk at 10:30 am on Tuesday, October 20, 2015. Franciscan Friars will officiate. Visitation will be held on Monday evening from 5-7 pm at Ruestman-Harris Funeral Home in Minonk and one hour before the funeral Mass at the church. Burial will be in St. Mary's Cemetery in Streator, IL.

She was born September 14, 1926 at Streator, the daughter of Thomas and Kathleen Noonan Bakalar.

In addition to her husband, she was preceded in death by her parents, her stepfather George Sabol, and her brother Thomas Bakalar, as well as several brothers-in-law and sisters-in-law.

Bernadette graduated from Streator High School in 1944. She was a member of St. Patrick Catholic Church, a past officer of the Church's Altar and Rosary Society, a member of Matrons' Club and Yankeetown Home Extension and a former member of Tall Oaks Country Club. She and her husband farmed for 37 years west of Minonk.

Memorials may be made to St. Patrick Catholic Church, Minonk. Online tributes and condolences may be sent to the family at www.ruestmanharrisfuneralhome.com.


To send flowers to the family or plant a tree in memory of Bernadette K. Oltman, please visit our floral store.

Please click here to view the video tribute
To send flowers to the family in memory of Bernadette Oltman, please visit our flower store.