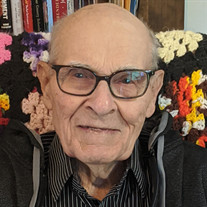 Arthur Manley Grube, 99, of El Paso, passed away at 2:15 p.m. on Saturday, October 24, 2020, with his family present at his home on the farm in rural El Paso.
He was born October 6, 1921, at Wheatfield, Indiana, to George Anthony and Emma Hershman Grube. He married Doris Jeanette Norman on June 17, 1945 at Trinity Methodist Church in Rensselaer, Indiana. She preceded him in death on Feb 4, 2015.
Surviving are his four children, Garry (Miriam) Grube, Chicago, Dennis (Susan) Grube, El Paso, Douglas Grube, El Paso and Nancy (David) Carter, Pleasant Prairie, Wis; ten grandchildren, Shellie, Paul, Matthew, David, Lori, Amy, Abigail, Lydia, Daniel and Hannah; twenty-four great-grandchildren, Alexandria, Arielle, Mitchell, Connor, Wesley, Nathaniel, Natalie, Nicholas, Naomi, Noah, Tristyn, Logan, Clayton, Gretchen, Flint, Coleman, Monroe, Hallie, Tessa, Grayson, Leo, Arthur, Adelaide, and Calvin; three great-great-grandchildren, Kya, Ruby, Bobbi, and two step great-great-grandchildren Tayla and Gavin.
Arthur was preceded in death by his parents; two brothers, Claire and Vernon Grube; two sisters, Thelma Shuman and Doris Zeck; granddaughter, Sherrie Ramsdell-Boll Hickey; grandson-in-law, Gabe Uphoff; and great-grandson, Gavin Grube.
Art was a grain and livestock farmer in the El Paso area for 75 years. In addition to corn, soybeans, oats, and alfalfa, he raised hogs, cattle and sheep. He slowed down in his 90's, but never really considered himself "retired".
Art was raised on the family farm in Wheatfield, IN. As the youngest in his family, he had a happy childhood spending time with his cousins, riding his pony Billy, and playing with his dog, Rex. He was a member of 4-H showing Chester White pure bred hogs at Indiana fairs, receiving 56 Grand Champion ribbons among many others. After high school, he completed an animal husbandry course at Purdue University and farmed in partnership with his father. In 1943, he enlisted in the Army Air Corps and served as a B-24 pilot with the 756 Squadron, 459th Bomber Group, 15th USAF based at Foggia, Italy. He flew 35 missions into Central Europe and was awarded the Distinguished Flying Cross. After his service, he moved to El Paso with his new wife, to begin his farming career.
Art was a member of the El Paso American Legion. He was active in the community, helping form and serving on the Ag council. and in 1956, he received the Jaycee's Award for "Outstanding Young Farmer of Woodford County." When his sons were Cub Scouts, he served as Scout Master. He also served on the El Paso school board. He enjoyed flying a Cessna 140 that he and 3 other local men owned in the late ‘60's. He was awarded the Kiwanis Senior Citizen of the Year in 2006. For his 85th birthday, his family treated him to a flight on a B-24. Wearing his uniform that day, a few attendees wondered if he were the pilot! He loved 40's big band music and would spend time listening to it as well as dancing to, and singing those great songs. He also enjoyed musical activities, participating in the El Paso CornCapades, and singing in the El Paso Community Choir. Shortly after moving to El Paso, the family began attending the Federated Church where Art sang in the church choir for many years. Later in life, he attended Community Bible Fellowship. He and Jeanette were members of El Paso Farmers Club for 43 years, and thoroughly enjoyed meeting monthly with other farmers and their wives for great food and fellowship. Art also loved to fish and waterski and enjoyed his yearly family vacations to Lake of the Ozarks.
Art was a kind, generous, humble, and polite man. A true gentleman, and a shining example of the Greatest Generation. His patriotism was always evident, but especially when he participated in the Honor Flight to Washington D.C. in 2009. His faith in the Lord was also evident in the example he set for his family as he lived a Godly life. He was deeply loved and respected by his family. His grandchildren and great-grandchildren loved to come to the farm and spend time with him. He will be greatly missed.
The family offers special thanks to those who helped care for him the last few months.
Visitation will be from 5 to 7pm Thursday, Oct.29 at Ruestman - Harris Funeral Home in El Paso. Masks are required. The funeral will be at 10:00am Friday, Oct. 30 at Community Bible Fellowship in El Paso, the Reverend Wesley Ooms officiating. Masks are required. Burial will be in Evergreen Cemetery with full military honors. In lieu of flowers, memorial contributions may be made to St. Jude Children's Research Hospital or Community Bible Fellowship.
Online condolences may be sent to www.ruestmanharrisfuneralhome.com.


To send flowers to the family or plant a tree in memory of Arthur Manley Grube, please visit our floral store.

Please click here to view the video tribute
To send flowers to the family in memory of Arthur Grube, please visit our flower store.