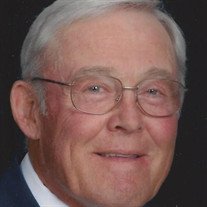 Arlen was born April 28, 1942, to Peter Ruestman Jr. and Blanche Marie (Krull) Ruestman in DeKalb, IL. He married Beverly Lucille Kettwich on July 29, 1962, in Minonk, IL. She survives. They were married for 56 years proudly raising a beautiful family with strong thoughtful values.

He was preceded in death by his parents and sister, Linda Kay Ford.

Arlen was a member of St. John's Lutheran Church in Toluca where he formerly served on the church council in many positions including chairman of the congregation, treasurer, and council member. He was very active for any of the church's needs. He was co-chairman of the Building Committee when the new church was built, and active with the building of the Parish Hall. He was instrumental in getting the first assisted hearing system installed in the church.

Arlen was a forward thinker and innovator. He strongly believed in conservation farming practices, preserving and building soil for future generations. He was years ahead of his time within the farming community involving technology. He was one of the first farmers to create and integrate GPS into farming and helped advance the farming technology we have today. His accounting ability and practices were second to none. Arlen would overwhelm any financial manager he worked with using the detailed information he provided. He Beta tested accounting software specializing in agriculture for FMS. "Technology isn't worth it if you can't apply the resulting data" - Arlen Ruestman, 1997. Over the years, Arlen and Greg were featured many times in numerous farming publications including Farm Journal, Successful Farming, Progressive Farmer, Farm Forum, and Farm Industry News. He was a member of Illinois Corn Growers Association and served many offices and Marshall-Putnam County Farm Bureau, serving on the Board of Directors for Evans Township.

Arlen, Dad, Grandpa, was a man of character and integrity, who deeply loved his family and lived by the Golden Rule. He loved and had great pride in his children and grandchildren.

Funeral services will be held on Sunday, August 12, 2018, at 2:00 p.m. at St. John's Lutheran Church in Toluca with a visitation 30 minutes prior to the funeral. Visitation will also be held on Saturday, August 11, 2018, from 4:00 to 7:00 p.m. at Ruestman-Harris Funeral Home in Minonk. Burial will be in Minonk Township Cemetery.

Memorials may be made to St. John's Lutheran Church in Toluca.

To send flowers to the family or plant a tree in memory of Arlen D. Ruestman, please visit our floral store.

Please click here to view the video tribute
To send flowers to the family in memory of Arlen Ruestman, please visit our flower store.