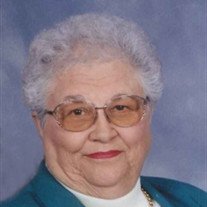 She was preceded in death by her parents and her husband.

Toni graduated from Schuyler High School in 1947.  She then
attended Mt. Saint Scholastica in Atchison, KS from
1947-1948.  She was employed at the Air Force Finance Center
in Denver, CO from 1948-1954.  She then moved to Greenville,
SC and later to Roanoke, IL in 1955.  Toni graduated from
Illinois Central College in the Teacher's aide program and worked
at Lincoln Junior High in Washington, IL.  She then worked at
St. Francis Medical Center in cardiology services from 1971-1991
when she retired.

She was a member of St. Joseph Catholic Church in Roanoke where
a mass of Christian burial will be celebrated at 11:00 AM on
Tuesday, April 1. Msgr. Charles Beebe will officiate. A rosary will
be recited at 9:00 AM at the church and visitation will be from
9:15 AM until 11:00 AM. Burial will be in Roanoke Township
Cemetery.  Knapp-Johnson-Harris Funeral Home is assisting the
family with their arrangements.

In lieu of flowers, memorial contributions may be made to 4-H or
St. Joseph Altar and Rosary Society. Online condolences may be sent
to the family at
www.knappjohnsonharris.com.

To send flowers to the family or plant a tree in memory of Antoinette "Toni" Amigoni, please visit our floral store.

To send flowers to the family in memory of Antoinette Amigoni, please visit our flower store.