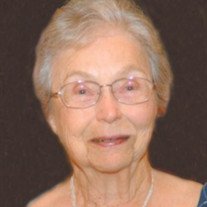 A visitation will be held on Friday, July 12, 2013, from 5:00
p.m. to 7:00 p.m., at Kibler-Brady-Ruestman Memorial Home in
Bloomington. Funeral Services will be on Saturday, July 13, 2013 at
10:30 a.m., at First Presbyterian Church in Normal, with Pastor
Larry Gaylord officiating. Interment will take place at Funk's
Grove Cemetery in McLean.

She is preceded in death by her parents, husband, and grandson
Geoffrey Eaton (Kelley) Farnsworth.

As a child, Anna Louise Allen attended a one-room schoolhouse,
paid attention, and skipped a grade-she rode a horse named "Puss"
two miles each day to get there. Growing up on a farm near Delavan
she learned the need for steadfast labor, intellectual curiosity,
and unflappable service to others that were to become the
organizing principles of her life.

At the University of Illinois and as a member of the Delta Delta
Delta sorority she formed friendships that would continue for the
rest of her life. While serving as Women's Business Manager for the
Daily Illini she met her husband George L. Farnsworth who was also
an editor-he was the tall man who came in to turn the light on for
her when she couldn't reach the drawstring for the light bulb.

Graduating in 1940 from the University of Illinois with a BS in
Home Economics, she was awarded numerous honors including Mortar
Board, Torch, Omicron Nu, and Alpha Lambda Delta.

Immediately after graduating, Anna Louise began teaching
high-school Home Economics in Atlanta, Illinois. She married in
1941 and began devoting much of her time and energy to her
family.

Throughout her life Anna Louise worked as a tireless
philanthropist, benefactress, and board member. In these capacities
she was a key figure in facilitating the merger between the Lucy
Orme Morgan and Booker T. Washington Homes. She was a board member
at Kemmerer Village, and volunteer for Western Avenue Community
Center, ISPE Ladies Auxiliary and Brokaw Hospital. She served on
Session for several terms at First Presbyterian Church, was a
member of PEO, and gave time and resources to countless other
charitable and benevolent causes.

Online condolences and memories of Anna may be sent to the
family at kiblerbradyruestman.com.

To send flowers to the family or plant a tree in memory of Anna Louise Farnsworth, please visit our floral store.

To send flowers to the family in memory of Anna Farnsworth, please visit our flower store.