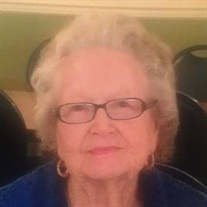 She was also preceded in death by her parents and grandson, Sean David Wilcox and great-grandson, Isley Bullard.

Alma graduated from Canton High School. She went to beauty school after graduation. They moved to Minonk where they would raise their family.

Alma went to St. James City on Pine Island in Florida every year since 1979 where she enjoyed playing golf and Bridge. She had Master points in Duplicate Bridge. She was a member of Fort Nightly Bridge Club for 40 years. She was also the president of the Alden Pine Golf League in Florida, served as a member of the Filger Library Board and Civic Center Association on Pine Island. Alma also enjoyed knitting, watching plays and reading.

Funeral services will be held at 11 a.m., Wednesday, April 12, 2017 at Ruestman-Harris Funeral Home in Minonk. Visitation will be from 4 to 6 p.m. Tuesday night at the funeral home. Burial will be in Minonk Township Cemetery.

In lieu of flowers, memorials may be made to Minonk United Methodist Church or a charity of the donor's choice.


To send flowers to the family or plant a tree in memory of Alma Wilcox, please visit our floral store.

Please click here to view the video tribute
To send flowers to the family in memory of Alma Wilcox, please visit our flower store.