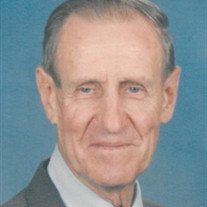 Springfield -  Wayne
Charles Tallon, 89, of Springfield formerly of Bloomington passed
away on Saturday, September 21, 2013 at 9:50 am in Springfield at
St. John's Hospital.

Funeral services will be held on
Wednesday, September 25, 2013 at 2 pm at Kibler-Brady-Ruestman
Memorial Home in Bloomington with Pastor Thomas Wirsing
officiating. Visitation will be held on Wednesday from Noon until
the time of the service at the memorial home.

Interment will be at Park Hill
Cemetery in Bloomington. Military rites will be conducted by the
Bloomington-Normal American Legion Honor Guard and the National
Guard Funeral Honor Guard from Decatur. In lieu of flowers,
memorial contributions may be directed to Lutheran Hour, or to
Trinity Lutheran Church in Bloomington. The family of Wayne has
entrusted Kibler-Brady-Ruestman Memorial Home in Bloomington to
handle arrangements.

Wayne was born on October 26, 1923
in Bloomington a son to Frank and Bertha (Sutter) Tallon. He
married Janet E. Staehlin on August 3, 1948 in Peoria, IL and she
survives.

Wayne was preceded in death by his
parents, one son, Stephen Tallon, and one sister Lorene
Lockenvitz.

He attended school in Downs, IL and
graduated from Downs High School in 1941. Wayne proudly served in
the U S Army and was stationed in Virginia after WWII. He farmed in
Mclean County his entire life with both grain and livestock.
Farming was Wayne's life and he loved his Oliver and John Deere
tractors.

Wayne was a life-long member of
Trinity Lutheran Church in Bloomington. He was a man who was
passionate about his faith and read the Bible daily.

He was very involved in both his
children and grandchildren's sporting events. Wayne enjoyed
spending time with his family and his grandchildren. He was an avid
basketball and baseball fan and loved blue Buicks. He enjoyed
cheering on the St. Louis Cardinals.

He will be sadly missed by his
family and friends.

To send flowers to the family or plant a tree in memory of Wayne Charles Tallon, please visit our floral store.

To send flowers to the family in memory of Wayne Tallon, please visit our flower store.