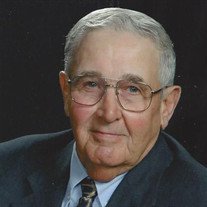 He was preceded in death by his parents and one sister, Regina.

Dean was a 1957 graduate of El Paso High School. He was the owner of Weber Bros. Construction for 25 years and later worked for the City of El Paso.

He was a member of the Trinity Lutheran Church in El Paso where he served as a trustee for several years. He also delivered for Meal on Wheels and helped at the El Paso Food Pantry.

Funeral services will be held at 11:00 am on Friday, April 22, 2016 at the Trinity Lutheran Church in El Paso. Pastor Jonathan Boehne will officiate. Visitation will be Thursday evening from 4-7 pm at the Ruestman-Harris Funeral Home in El Paso. Burial will be in Evergreen Cemetery in El Paso.

Memorials may be directed to Trinity Lutheran Church or the El Paso Rescue Squad. Online condolences may be sent to www.ruestmanharrisfuneralhome.com.

To send flowers to the family or plant a tree in memory of W. Dean Weber, please visit our floral store.

To send flowers to the family in memory of W. Weber, please visit our flower store.