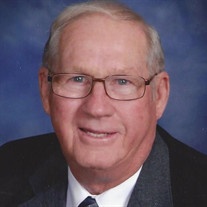 He was born on January 13, 1939 in Streator, IL a son of Raymond and Elizabeth Johnson Seggerman. He married Sally Klendworth on June 5, 1959 in Minonk, IL. She survives.

He was a member of St. Paul's United Church of Christ in Minonk. He graduated from Minonk-Dana-Rutland High School in 1957 and was engaged in farming until retirement in 2015. He served on the Minonk Township Board for 42 Years. He was a member of the Masonic Lodge, Shriners, and the Consistary. Ron enjoyed watching his grandsons in their activities and collecting cast iron farm toys.

In lieu of flowers, memorials may be made to the Minonk Food Pantry or Shriners Children's Hospital for Children.

Online tributes and condolences may be made at www.ruestmanharrisfuneralhome.com


To send flowers to the family or plant a tree in memory of Ronald "Ron" Seggerman, please visit our floral store.

To send flowers to the family in memory of Ronald Seggerman, please visit our flower store.