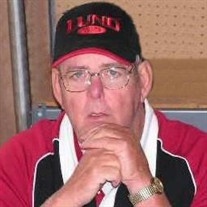 He was preceded in death by his parents and one brother Charles Kidd, Jr.

After 33 years of service, Bob retired as a training supervisor for DuPont in 2000.

Bob was the former tournament director for the Illinois Walleye Trail for ten years. He was past president of the Spring Valley Walleye Club and an avid fisherman. He enjoyed hunting and was an enthusiastic outdoorsman.

Bob was a Vietnam veteran serving with the U.S. Army. He was a lifetime member of the VFW Post 6026 in El Paso and a member of the American Legion and DAV.

A private service will be held at Ruestman-Harris Funeral Home in El Paso. Burial will be in Evergreen Cemetery.

Memorials may be made to the American Diabetes Association.

Online tributes and memorials may be made at www.ruestmanharrisfuneralhome.com.

To send flowers to the family or plant a tree in memory of Robert L. "Bob" Kidd, please visit our floral store.

To send flowers to the family in memory of Robert Kidd, please visit our flower store.