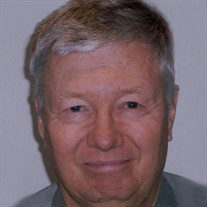 Richard R. Bergquist, 76, of El Paso, IL, quietly passed away at 7:16pm on January 9, 2016 at the Heartland Health Care Center, Henry, IL after a long attempt at rehabilitation from a traumatic brain injury fall.

Funeral services will be held at 10 am on Saturday January 30, 2016 at St. Joseph's Catholic Church, Chenoa, IL with Father Carl Lo Presti officiating. Visitation will be from 5-7pm on Friday, January 29, 2016 at the Ruestman-Harris Funeral Home in El Paso, IL. Family committal services will take place at a later date.

Richard R. Bergquist, known as "Dick" to his friends and later on as "Gramps" by his family, was born on July 31, 1939 in Washburn, ND to Ernest and Florence Backman Bergquist. Dick graduated from North Dakota State University as a commissioned Second Lieutenant Armor officer in the United States Army and spent two years at Ft. Carson, CO. Dick was united in marriage to the former Patricia A. Cassidy of Ambler, PA on August 8, 1964. They then moved to Ithaca, NY where Dick went on to get his PhD in plant pathology at Cornell University. Following grad school, Dick transitioned to his field of study and was employed by the University of Hawaii as a plant pathologist residing on the island of Kauai for four years. Dick then moved his wife and five children to El Paso, IL where he was employed by Pfister Hybrid Corn Company as the resident geneticist responsible for the development of hybrid corn resistant to diseases and natural factors. Dick finished his career with DuPont's Pioneer Agri-business division in 2004. Dick's 30 year career of improving corn genetics from 1974 to 2004 yielded the development of nineteen registered patents on corn inbreeds.

Those who worked with Dick in the corn fields over the summers remember the various jobs that he was particularly fond of that included inoculating, rouging, and hand-pollinating corn. This connection appropriately earned him the nickname from his peers and colleagues as ‘Doc Corn.' Outside of the cornfields, Dick was an avid football fan who as a season ticket holder, actively rooted for the University of Illinois Fighting Illini. Dick also enjoyed fishing, cooking, monitoring the weather, building things, and bird watching. He will best be remembered by his family for his unique, loving, and often hilarious way of living.

Dick was preceded in death by his grandson, Gavin Grube, his parents Ernest and Florence Bergquist, and two brothers William and Paul Bergquist.

In lieu of flowers, memorial donations may be made to St. Jude Children's Research Hospital in honor of his grandson, Gavin Grube or The El Paso Emergency Squad.

To send flowers to the family or plant a tree in memory of Richard "Dick" Bergquist, please visit our floral store.

Please click here to view the video tribute
To send flowers to the family in memory of Richard Bergquist, please visit our flower store.