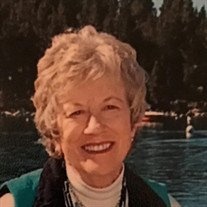 She was preceded in death by her parents.

Lois was a homemaker and had also been employed with Schertz Agricultural Service and Schertz Aerial Service.

She was a member of the East White Oak Bible Church where she was active with the Senior Saints.

Funeral services will be held at 10:30 am on Thursday, February 23, 2017 at East White Oak Bible Church in Carlock. Pastor Wes Ooms will officiate. Visitation will be held Wednesday evening from 4-7 pm at the Ruestman-Harris Funeral Home in El Paso and one hour prior to the funeral service at the church. Burial will be in Park Lawn Cemetery in Danvers.

Memorials may be given to the El Paso Public Library or East White Oak Bible Church. Online condolences may be sent to www.ruestmanharrisfuneralhome.com.

To send flowers to the family or plant a tree in memory of Lois Jean Schertz, please visit our floral store.

Please click here to view the video tribute
To send flowers to the family in memory of Lois Schertz, please visit our flower store.