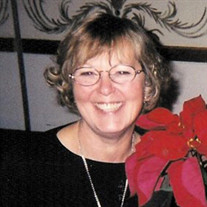 Karen L. Fulte, 70, of El Paso, passed away July 23, 2019, at her home.
Karen was born in Hammond, Indiana, the daughter of Arthur G. Fulte, Jr. and Lorraine M. Matakiewicz Fulte.
Karen is survived by her aunt, Dolores Fulte, and her cousin Janet (Ralph) Fulte Papesh, both of Munster, IN and cousin Carrie (Tom) Fulte-Meyer of Alexandria, VA. Also surviving are Janet's daughter Morgan Papesh and Carrie's son, Samuel Meyer.
She was a graduate of Indiana University and became an elementary school teacher in Indiana. She also served for a time as a teacher for the hildren of American military members in Germany. She was a dedicated teacher who always went above and beyond for her "children." Karen later became a State Farm insurance agent in El Paso, Illinois and her office was located under the 2nd story birthplace of Archbishop Fulton John Sheen. Promoting the bishop and his heritage then became Karen's passion. Following her retirement, she founded the Archbishop Fulton John Sheen Spiritual Centre and established the Bishop Fulton Sheen Museum in El Paso.
Karen graciously hosted many visitors and pilgrims at the Museum and worked with great dedication to promote the cause for the Bishop's canonization, including a visit to Rome to meet Pope Francis in 2018.
She was also working with her good friend, Sam Phillipe, from Israel to help dedicate a peace park near Jerusalem in honor of her parents which will also include a memorial to Bishop Fulton Sheen.
Karen was preceded in death by her parents and her uncle, Marion "Red" Fulte.
Cremation rites were accorded. Ridgelawn Funeral Home of Gary, IN is handling cremation arrangements.
A memorial mass will be held at St. Mary's Catholic Church in El Paso on Saturday, August 31, 2019 at 10:00 a.m.


To send flowers to the family or plant a tree in memory of Karen L. Fulte, please visit our floral store.

To send flowers to the family in memory of Karen Fulte, please visit our flower store.