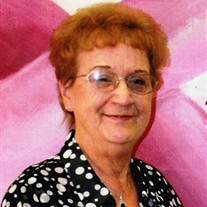 Joyce M. Cooper, 79, of
Bloomington, IL, passed away at 4:15 a.m. on Sunday (October 06,
2013) at OSF St. Joseph Medical Center in Bloomington. A memorial
service will be held at Our Savior Lutheran Church in Normal on
Tuesday, October 08, 2013 at 11 a.m. with Pastor Jeffrey R.
Henricks officiating. Visitation will be held from 5-7 p.m. on
Monday (October 07, 2013) at the Church. Cremation rites have been
accorded. In lieu of flowers memorial contributions may be made to
Our Savior Lutheran Church or The Humane Society.
Kibler-Brady-Ruestman Memorial Home is assisting the family with
arrangements.

Joyce was born August 22, 1934 in
Lincoln, Illinois, a daughter to Raymond and Florence Denou Miller.
She married James L. Cooper on July 07, 1975 in Ormond Beach,
Florida. He survives.

She was preceded in death by her
parents, one grandson, Ryan; and a step-son, James Jr.

Joyce graduated from Bloomington
High School and was a member of Our Savior Lutheran Church in
Normal. She was a founding member of the Lioness Club in Fairbury,
IL, a member of the Red Hat Society and "Yet To Be Named Society."
Joyce had a passion for animals and her flower garden. She had
several horses, cats, and dogs that she cared for including her
Pomeranian, a rescue dog named Duke. She enjoyed Nascar races and
singing in the Our Savior Lutheran Church Choir. Joyce loved her
family and will be sorely missed.

To send flowers to the family or plant a tree in memory of Joyce M. Cooper, please visit our floral store.

To send flowers to the family in memory of Joyce Cooper, please visit our flower store.