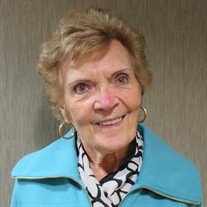 Helen Anita Kean 97, of Bloomington, formerly of Destin, FL and Benard, IA, passed away on September 15, 2019 at Martin Health Center in Bloomington. She was born on December 19, 1921 in Benard, IA to Frank X. and (Dora E. Takes) Pfab. She married Robert J. Kean on June 3, 1947 at New Melleray Abbey Peosta, IA. He preceded her in death on February 23, 1981. She later married William Kirkpatrick on November 30, 2001 in Destin, FL. He preceded her in death on June 8, 2012.
She is survived by 1 daughter: Cynthia Janaan Kean of Tullahoma, TN; 2 grandchildren: Christine (Jeremy) Brown of NC; F. Paul McCown of Tullahoma, TN; 1 brother: James (Linda) Pfab of El Paso; several nieces and nephews and her godchild Patti Carter who helped in many ways.
Helen was preceded in death by her parents; 2 husbands; 1 brother: Walter Pfab and her son Robert Kean Jr.
Cremation rites have been entrusted to Ruestman-Harris Funeral Home in El Paso. Helen will be laid to rest at a later date in Arlington National Cemetery next to her late husband CW4 Robert J Kean who served in World War II, Korea and Vietnam Wars.
Online tributes and condolences may be made at ruestmanharrisfuneralhome.com.

To send flowers to the family or plant a tree in memory of Helen Anita Kean, please visit our floral store.

To send flowers to the family in memory of Helen Kean, please visit our flower store.