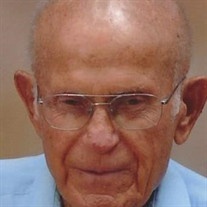 SECOR- Fred Servis, 91, of Secor, passed away at 2:07 AM on Monday April 17, 2017 at home.
Cremation rites will be accorded and a memorial service will be held at a later date.

He was preceded in death by his parents; a son, Ronald Servis; 4 brothers; and 3 sisters.
Fred served in Japan during World War II. He was an auto mechanic and a welder and was a hard worker all of his life.

Memorials may be made to American Alzheimer's Association.Online condolences and memories may be directed to his family at www.ruestmanharrisfuneralhome.com

To send flowers to the family or plant a tree in memory of Fred Servis, please visit our floral store.

To send flowers to the family in memory of Fred Servis, please visit our flower store.