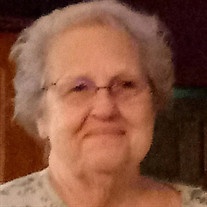 Dorothy M, Wollberg, 84, of El Paso passed away Friday, April 17, 2020 at 10:37 p.m. at her daughter's residence in El Paso.
Dorothy was born on February 26, 1936 in Hastings, NE to Herbert and Virginia Martin Zimmerman. She married John F. West on September 21, 1959 in Minonk. He died on February 28, 1980. She later married Robert Wollberg on October 4, 1986. He died on December 21, 2014.
Survivors include her children, John (Patty) West of Chenoa; Deb (Lanny) Stewart of El Paso; Debbie (Dale) Murcek of Columbus, NE; Doug (Bev) Gates of El Paso; sister Delores "Dee" (Jim) Hatlstad of Stanley, WI; five grandchildren and seven great-grandchildren
She was preceded in death by her parents and one great-grandson, John Lane West.
Dorothy worked in Social Services at Heritage Manor in El Paso and was a member of the Trinity Lutheran Church in El Paso and the El Paso Quilting Club.
Cremation will be accorded. Due to COVID 19 restrictions, a private family service will be held with inurnment at St. Mary's Cemetery in El Paso. Ruestman-Harris Funeral Home of El Paso is assisting the family with arrangements.
In lieu of flowers, memorials can be left to the El Paso Emergency Squad. Online condolences may be sent to his family at www.ruestmanharrisfuneralhome.com

To send flowers to the family or plant a tree in memory of Dorothy M. Wollberg, please visit our floral store.

To send flowers to the family in memory of Dorothy Wollberg, please visit our flower store.