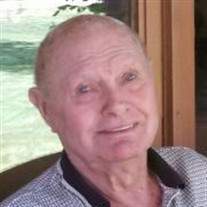 Don was born August 25, 1927 in Minonk Township, the son of Joseph and Barbara (Reinhardt) Ioerger. After Don's marriage to Irma Parsons, he met his companion of 47 years, Shirley Wagner. She survives.

Also surviving is his only daughter Diana Ioerger of Goodfield, 3 sisters, Carolyn Welch of Minonk, Lois (Larry) Bearss of Minonk and Joan Blackmore of El Paso; many nieces and nephews. He was Grandpa Don to 9 grandchildren.

Don was preceded in death by his parents, and two brothers in law, Robert Welch and Lowell Blackmore.

Don was a U.S. Army veteran. He farmed locally in the El Paso Area for many years. He was a long time card player at Topsy's Round Table. He was always helping others and never met a stranger. When he walked into a room you knew Don was there. He touched many lives and will be dearly missed.

A funeral service will be held at 10:30 a.m., Wednesday, September 27, 2017 at Ruestman-Harris Funeral Home in El Paso. Visitation will be Tuesday from 4 to 7 p.m. at the funeral home. Burial
will be at Baughman Cemetery.

In Lieu of flowers, memorials may be made to OSF Richard L. Owens Hospice Home.


To send flowers to the family or plant a tree in memory of Donald Ioerger, please visit our floral store.

Please click here to view the video tribute
To send flowers to the family in memory of Donald Ioerger, please visit our flower store.