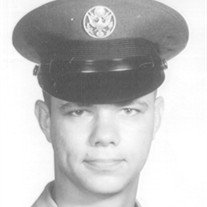 Daniel was born April 18, 1943 in
Bloomington, Illinois, a son to Arthur W. and Mildred Reeder
Dithen.

Funeral services will be Tuesday,
May 20, 2014 at 12:00 noon at Kibler-Brady-Ruestman Memorial Home
in Bloomington with Pastor Stephanie Soon officiating. Visitation
will be held one hour prior to the service at the funeral home.
Interment will be in Park Hill Cemetery, Bloomington.

Daniel served in the United States
Air Force and was stationed in England.

He worked at G.M. & O Railroad.
Later Daniel and David both ran Dithen service station. Dan enjoyed
cooking and gardening. He and David were very good cooks. Dan would
do anything to help out others. He will be truly missed by his
family and friends. Memorial contributions may be directed to the
Community Cancer Center.

Daniel has gone to join his twin
brother. They are now together forever.

To send flowers to the family or plant a tree in memory of Daniel Dithen, please visit our floral store.

To send flowers to the family in memory of Daniel Dithen, please visit our flower store.