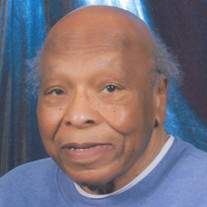 Bloomington - Carroll R. Alexander, 79, of Bloomington, passed
away at 5:47 p.m. on Tuesday, October 1, 2013 at Advocate BroMenn
Medical Center in Normal.

Funeral services will be at noon on
Saturday, October 5, 2013 at Loving Missionary Baptist Church in
Bloomington with Pastor William L. Johnson officiating.
Visitation will be from 11:00-12:00 prior to the service at the
church.  Following funeral services cremation rites will be
accorded.  Inurnment will be at a later date in Evergreen
Memorial Cemetery in Bloomington.

Full Military Rites will be
accorded by The Bloomington-Normal American Legion Honor Guard and
The National Guard Funeral Honor Guard at the church. In lieu of
flowers, memorials may be made in Carroll's name to Loving
Missionary Baptist Church.  Kibler-Brady-Ruestman Memorial
Home in Bloomington is assisting the family with arrangements.

Carroll was born on December 10,
1933 in Bloomington, IL,  a son to Warwick Sargent and Ethel
Murray.

He was preceded in death by his
parents, a sister, Victoria Eugenia  Sargent and a brother,
William Sargent.

Carroll was employed as an
electrician with Verizon Wireless for over 48 years. He was a
member of the IBEW.  He was a member of Loving Missionary
Baptist Church in Bloomington for over 30 years.  He served as
a Deacon in the church, was a Sunday school teacher and enjoyed
singing in the church choir.

He proudly served his country in
the United States Air Force during the Korean War.

He enjoyed Praising the Lord,
singing, playing the tambourine, helping people, fishing, baking,
eating sweets and baseball.  He loved his friends, family and
grandchildren, he never met a stranger.

Carroll was deeply loved by his
family and friends and will be missed by all.

To send flowers to the family or plant a tree in memory of Carroll R. Alexander, please visit our floral store.

To send flowers to the family in memory of Carroll Alexander, please visit our flower store.