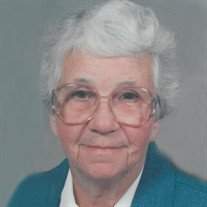 She was preceded in death by a son, Daniel; brother, Russell; and a sister Alma.

Alta and her husband Gene farmed in the El Paso area. She was a member of the United Methodist Church, El Paso.

Private family services will be held at Evergreen Cemetery, El Paso. Rev. Shelly Forrest will officiate. Ruestman-Harris Funeral Home, El Paso is assisting her family with arrangements.
In lieu of flowers, memorials may be directed to the Alzheimer's Association or charity of the donor's choice. Online condolences may be sent to the family at www.ruestmanharrisfuneralhome.com

To send flowers to the family or plant a tree in memory of Alta B. Dressler, please visit our floral store.

To send flowers to the family in memory of Alta Dressler, please visit our flower store.